30 days before the engines start roaring in Valencia, the NASCAR Whelen Euro Series announced today to have received 30 season entries, setting a new record in the European NASCAR championship history.

19 different teams submitted their entries to the NWES organization and a strong mix of returning powerhouses and prestigious newcomers will bring the competition to a new high.

With 10 different teams featuring a NWES race win in their palmares, the battle for the NASCAR Whelen Euro Series titles and trophies promises to be more exciting than ever, confirming NWES as the best touring car series in Europe both for fans and competitors.

All major contenders from the 2017 season will be back to a NWES grid. After winning the NWES Championship with Alon Day, CAAL Racing will return with 3 Chevrolets, champion team Knauf Racing will field once again two Mustangs, one of which for ELITE 2 Division champion Thomas Ferrando.

PK Carsport will field two cars once again as will Alex Caffi Motorsport, while Braxx Racing will expand to three cars. Racers Motorsport will bring three Mustangs to the track, Renauer Motorsport and MRT by Nocentini will field two. Back will also be perennial contender RDV Compétition alongside Racing Total, DF1 Racing, Mishumotors and The Club Motorsports all with one car.

An impressive list of newcomers submitted their entries to the NASCAR Whelen Euro Series. The newly formed Go Fas Racing Europe will represent a Monster Energy NASCAR Cup Series on the NWES grid for the first time, Pegasus Racing will make the switch from Endurance racing and Solaris Motorsport will come from GT racing.

The NASCAR GP OF SPAIN will take place at the Circuit Ricardo Tormo on April 14-15 in the context of the fifth edition of the Valencia NASCAR Fest. Tickets are available at: https://www.circuitvalencia.com/valencia-nascar-fest-2018/ 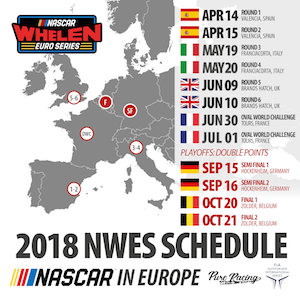